Together with our Czech partner organisation IURE and the Polish Panoptykon Foundation, we strongly criticize the planned preventive automatic facial recognition in the border region of the German federal state of Saxony, the Czech Republic and Poland.
The debate and potential vote in the Saxon parliament was set to take place in late January 2019. Considerable objections and controversy however led to this being postponed to March 2019, giving us more time to inform people, organisations and politicians about the problematic bill.

Digitalcourage has published a statement in which we criticize the course of surveillance politics currently pursued by the governing CDU/SPD coalition in Saxony. Digitalcourage especially warns about the planned use of covert agents and machine guns, the concept of “abstract danger”, the fact that contacts and companions are affected, and about the planned preventive surveillance of all telecommunication.

Update: On Febuary 5th, the Federal Constitutional Court states: „Provisions of the Länder Baden-Württemberg and Hesse on automatic number plate recognition are in part unconstitutional".

In a statement, Digitalcourage criticizes, among other things, § 59 of the planned new Saxon police law, titled “Use of technical means in order to prevent serious cross-border crime”:

“The planned border surveillance places large parts of Saxony under some sort of state of emergency, and it is an statement of distrust toward our Czech and Polish neighbours,” Digitalcourage's Friedemann Ebelt says. “Paragraph 12 of the Saxon Constitution requires that we work together across the borders – not to police them with automated preventive systems.”

IuRe, together with representatives from the Czech Pirate Party, has announced they will consult on the matter with their Minister of Foreign Affairs, Tomáš Petříček.

“From the point of view of Czech citizens, we perceive the plans for camera systems along the border and 30 km into Germany as a threat. (…) Even if the stated goal is to fight cross-border crime, we should not overlook the fact that it is a major violation of the rights of everyone who crosses the border,” says IuRe lawyer Jan Vobořil in a press release (translation by Digitalcourage).

“The use of facial recognition systems means that every person is treated as potentially suspect. These plans signal a lack of trust between Polish and German police officers,” says Wojciech Klicki, legal analyst at the Polish Panoptykon Foundation. “The recording of personal data is only justifiable in concrete and justified individual cases. In any other situation, these kind of systems are essentially nothing but mass surveillance of the local population and of commuters from Poland.”

“Digitalcourage observes with great concern that with these changes, the Saxon Judiciary and Police will take on characteristics of a preventive state,” says Friedemann Ebelt from Digitalcourage. “With the planned preventive video surveillance and monitoring of telecommunication, including the authority to process those data, the focus of police work will shift from investigating to surveillance.” 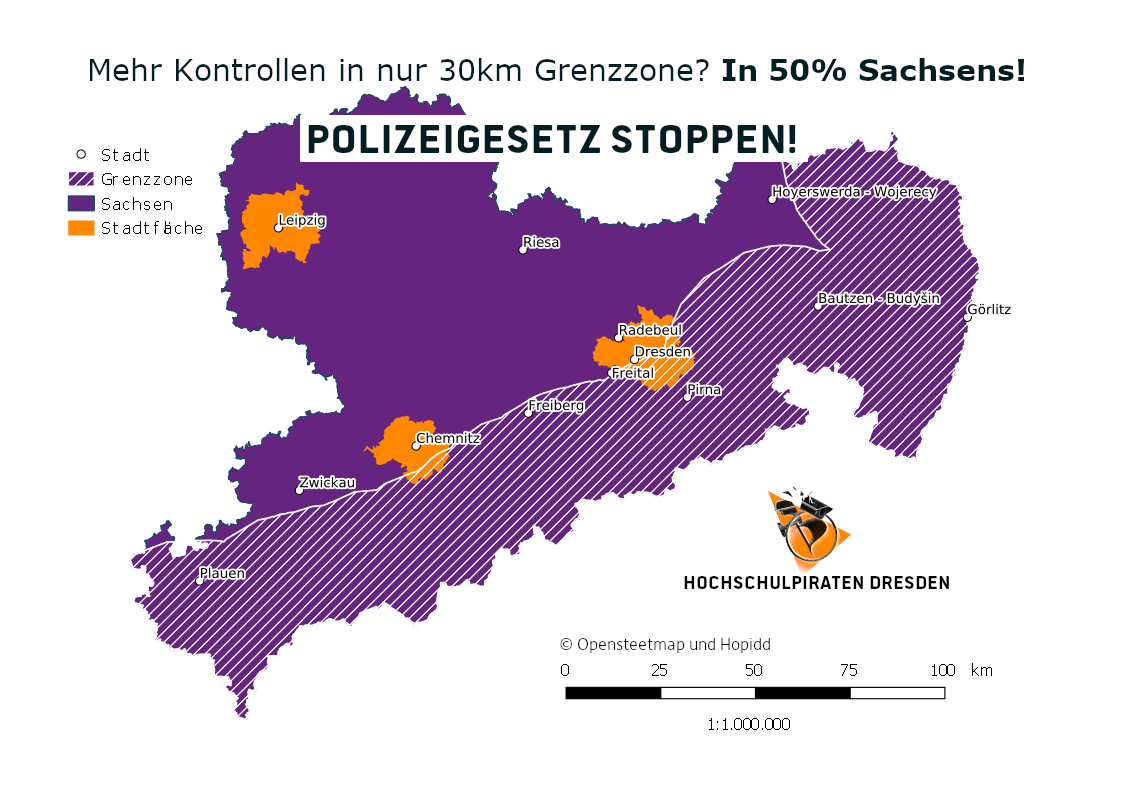 The intensive surveillance area is intended to cover 30–50% of the entire state of Saxony [update: just over 50% as calculated by the Pirate Party group at the University of Dresden]. More precisely: it includes practically the entire districts of Görlitz, Sächsische Schweiz-Osterzgebirge, Erzgebirgskreis, plus large parts of the Vogtlandkreis and Mittelsachsen districts. The area defined as ‘border region’ stretches into the cities of Dresden and Chemnitz.

The conference of the independent national and regional Data Protection Authorities in Germany declared on 30 March 2017 that “The use of video cameras with biometric facial recognition can completely destroy the freedom to remain anonymous in public spaces. It’s practically impossible to evade this kind of surveillance, let alone to control it.” (Data Protection Conference, 2017)

Digitalcourage demands that this legislation be aborted

So far, the Saxon Interior Ministry has not responded to the questions posed by Digitalcourage regarding the planned changes in the Saxon law. To us at Digitalcourage it seems reasonable to assume that no attempts are currently being made to find less intrusive alternatives for the planned monitoring of the border region. Nor is there any sign that the required privacy impact assessment for § 59 of this new police law has been made. Digitalcourage therefore calls for this legislation to be aborted – especially since due diligence has to be given absolute priority in a legislative process that would lead to such grave incursions into people's fundamental rights.